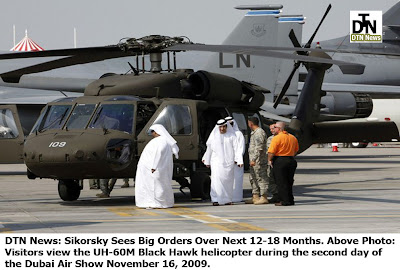 is week from a Middle Eastern country for the international version of its Black Hawk helicopter.
Sikorsky President Jeff Pino declined to name the Middle Eastern customer ahead of a news conference this week at the Farnborough air show, but said the same country was also buying the company's S-76D medium-twin helicopter.
While there was less "aggressiveness" in international military orders at the moment and a malaise in the commercial market, Pino said Sikorsky was still preparing bids for many foreign competitions.
"There's a lot going on," Pino told Reuters in an interview ahead of the air show, saying the company was looking forward to big orders in the next 12 to 18 months. He said orders could come from the Middle East, Europe and Latin America.
Sikorsky is due to deliver the first S-92 maritime helicopter to Canada by November, a helicopter that was delayed by several years but which is starting to attract international interest as well, Pino said.
Pino said Sikorsky was winning about 60 to 70 percent of the competitions it qualified for and was well-positioned with its Black Hawk and Sea Hawk models in particular.
President Barack Obama in January told Congress about a package of arms sales to Taiwan valued at up to $6.4 billion, including 60 UH-60M Black Hawk helicopters, and Sikorsky also won a Swedish competition for 15 helicopters.
VERY VALID
Closer to home, Sikorsky plans to compete in three separate U.S. military competitions -- a new presidential helicopter program valued at under $7 billion, an Air Force rescue helicopter program that could generate up to $3 billion in orders and an armed helicopter for the U.S. Army that could generate up to $8 billion in orders.
Sikorsky has teamed with Lockheed Martin Corp (LMT.N) to bid for the presidential helicopter and Air Force programs, a teaming arrangement that Pino said felt very "natural," given long years of the long collaboration on the H-60 helicopters.
Pino acknowledged pressure on the Pentagon to rein in defense spending and said there was some concern that the new start programs could be delayed to save money.
But he said all three helicopter programs looked like very valid requirements, given the age of the aircraft they will replace, which should ensure the programs stayed on track.
"We just want to make sure that the pendulum doesn't go too far," he said. "We want to make sure there's a natural pace."
Pino said Sikorksy's CH-53K, a new helicopter built for the Marine Corps, was expected to face a critical design review next week after some initial technical problems, and the first aircraft should be flying in 18 to 24 months.
U.S. defense contractors were clearly facing more scrutiny than ever before, but Sikorsky was executing well on most of its programs, he said.
"It's clear they want better performance. It's clear they want lower cost and it's clear that that's how they're going to judge and evaluate contractors," he said.
(Reporting by Andrea Shalal-Esa; Editing by David Holmes)
Posted by DEFENSE NEWS at 5:28:00 AM