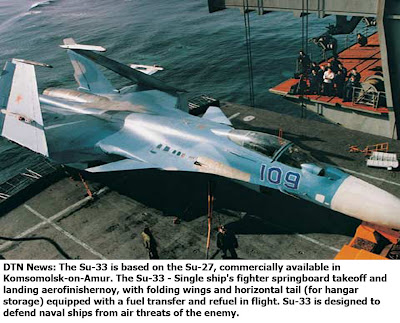 The Chinese fighter jet is based on the Soviet T10K training aircraft, which China received from Ukraine. Chinese engineers found it very difficult to solve the problem of folding wings of deck-based fighter jets. Now the problem has been solved.
It is not clear yet, if the new plane has performed its first flight yet: the Chinese Air Force does not have its own test center for the sea aviation.
China earlier attempted to purchase two Su-33 planes from Russia to study the aircraft performance. Moscow rejected the deal over the fear of technology leak, as it previously happened with the J-11 aircraft, RBC reports.
When trying to enter the Chinese arms market, Russia handed over the assembly technology for the Su-27CK fighter jet to China. As a result, China modernized the plane and began to work on a serial production of the J-11 plane. Such a step can give China an opportunity to put competitive pressure on Russia on the arms market of third countries, experts said.
Russia started delivering Su-27CK planes to China in 1992. The sides signed an agreement for 76 fighters of the class. In 1995, Russia sold the license for the production of 200 more fighters. China’s Shenyang Aircraft Corporation started assembling them as J-11 with the use of Russian components.
By 2003 Russia had delivered 95 packages for J-11 and was supposed to ship 105 more, although China did not sign the contract for them. In 2007, China demonstrated first prototypes of the J-11B jet – nearly the absolute copy of Russia’s Su-27CMK.
For the time being, China has launched the serial production of J-10, J-11 and FC-1 fighter jets. These planes bear a striking resemblance to Russia’s Su-27/30 and MiG-29. In the nearest future, China intends to build and sell not less than 1,200 fighters – the prices on them will be significantly lower than those on the Russian “originals.”
After the incident with J-11, Russia officially notified China of the violation of international agreements and promised to launch legal proceedings to defend its intellectual property.
China is not the only country that established the pirated production based on Russian technologies. Russia’s defense export giant Rosoboronexport said that over 15 countries (including Bulgaria, Romania, Egypt) produce Kalashnikov assault rifles either on expired licenses or without any license at all. Arms pirates also eye multiple artillery rocket systems, tank equipment and radars.
The Sukhoi Su-33 (NATO reporting name: Flanker-D) is a carrier-based multi-role fighter aircraft produced by Russian firm Sukhoi beginning in 1982. It is a derivative of the Su-27 ‘Flanker’ and was initially known as the Su-27K. The main differences from the Su-27 are that the Su-33 can operate from aircraft carriers and is capable of aerial refueling.
Unlike comparable American carrier-borne fighters like the F-14 Tomcat, the Su-33 uses a ski-jump instead of catapult for carrier takeoff. Using the ski-jump avoids the high catapult-induced loads, and provides the aircraft with a positive pitch and climb angle upon launch. However, when using a ski-jump, the Su-33 cannot launch at maximum takeoff weight.
The Su-33 sports canards that shorten the take-off distance and improve maneuverability, but required reshaping of the leading edge extensions. The canards counter pitch-down force generated by leading and trailing edge flaps reducing approach speed by 1.5 times; they also act as destabilizers in supersonic flight, by reducing pitch trim drag. The wing area was also increased, though the span remained unchanged. The wings were fitted with power-assisted folding, and the vertical tails were shortened to allow the fighter to fit in the typically crowded hangars of an aircraft carrier. The rear radome was shortened and reshaped to allow for the tail hook, as well as to save space inside the hangars. The IRST was moved to provide better downward visibility and an L-shaped retractable refuelling probe was fitted to increase range.
Posted by DEFENSE NEWS at 7:43:00 AM