Source: Startegy Page
(NSI News Source Info) TORONTO, Canada - May 17, 2010: Satellite photos recently revealed that the Chinese Navy has received J-11 jet fighters. These are illegal Chinese copies of the Russian Su-27. This plagiarism has been a source of friction between Russia and China for over five years. It all began, legally, in 1995, when 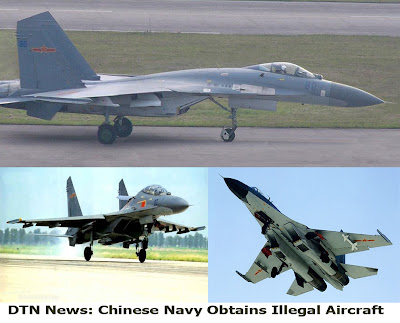 China paid $2.5 billion for the right to build 200 Su-27s. Russia would supply engines and electronics, with China building the other components according to Russian plans and specifications. But after 95 of the Chinese built aircraft were built, Russia cancelled the agreement. They claimed that China was using the knowledge acquired with this Su-27 program, to build their own copy of the Su-27, the J-11. Russia kept the piracy issue quiet, and warned the Chinese that simply copying Russian technology would produce an inferior aircraft. Apparently the Chinese did not agree, and are continuing their work on the J-11, using only, what they claim is, Chinese technology.
The J-11 is believed to now include better electronics and some other Chinese design modifications. China can manufacture most of the components of the J-11, the one major element it must import are the engines. China believes it will be free from dependence on Russia for military jet engines within the next 5-10 years. Currently, China imports two Russian engines, the $3.5 million AL-31 (for the Su-27/30, J-11, J-10) and the $2.5 million RD-93 (a version of the MiG-29s RD-33) for the JF-17 (a F-16 type aircraft developed in cooperation with Pakistan.)
Meanwhile, Chinese engineers have managed to master most of the manufacturing techniques needed to make a Chinese copy of the Russian AL31F engine. This Chinese copy, the WS10A, was part of a program that has also developed the WS-13, to replace the RD-93. China has long copied foreign technology, not always successfully. But in the last decade, China has poured much money into developing a jet engine manufacturing capability. The Chinese encountered many of the same problems as the Russians did when developing their own engine design and construction skills. But China has several advantages. First, they know of the mistakes the Russians had made, and so were able to avoid many of them. Then there was the fact that China had better access to Western manufacturing technology (both legally and illegally). Finally, China was, unlike the Soviets, able to develop their engine manufacturing capabilities in a market economy. This was much more efficient than the command economy that the Soviets were saddled with for seven decades.
The navy already has a regiment of 24 Su-30s (an advanced version of the Su-27), so they have experience with this type . The J-11s will apparently join the Su-30s in defending Chinese naval bases. The navy's offensive airpower comes in the form of J-8s (a two engine version of the MiG-21, which is no good as a fighter, but proved adequate as a bomber) and even older copies of Russian bombers. The J-11 can also be equipped with anti-ship missiles, and may eventually replace the J-8 and other missile carrying naval aircraft.
The J-8 is an 18 ton, two engine, variant of the MiG-21. This was China's first attempt at building their own aircraft design. But it was not a very original or successful effort. The J-8 first flew in 1969, and didn't get into service until 1980. It was quickly realized that this was a turkey. Fewer than 400 were built. The F-8 carries about three tons of bombs, and is not very maneuverable. China decided to make the most of it, and used the J-8 as a reconnaissance and electronic warfare aircraft. Thus the navy adopted it as well. It was a J-8 that collided with an American EP-3 reconnaissance aircraft off the coast in 2001. The J-8, which made the mistake of maneuvering too close to the much slower (propeller driven) EP-3, and crashed. The EP-3 survived and made an emergency landing in China, kicking off months of diplomatic tension.
The J-11 is a continuation of the J-8 effort, but using more modern technology, and three decades of experience building warplanes. Russian concerns about Chinese inexperience are unfounded. The Chinese have a track record in this area, and the J-11 is apparently the best locally manufactured combat aircraft they have yet produced. With the growing Chinese skill in building jet engines, China has entered the big leagues of warplane manufacturing.
*This article is being posted from Toronto, Canada By DTN News ~ Defense-Technology News, contact: dtnnews@ymail.com
Disclaimer statement
Whilst every effort has been made to ensure the accuracy of the information supplied herein, DTN News ~ Defense-Technology News cannot be held responsible for any errors or omissions. Unless otherwise indicated, opinions expressed herein are those of the author of the page and do not necessarily represent the corporate views of DTN News ~ Defense-Technology News.
Posted by DEFENSE NEWS at 7:21:00 AM