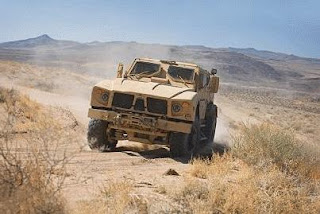 Defense News ~OSHKOSH, Wis.--(BUSINESS WIRE)--Oshkosh Defense, a division of Oshkosh Corporation (NYSE:OSK - News), received the 2009 Wisconsin Manufacturer of the Year (MOTY), winning the Grand Award in the “Mega” category for companies with more than 750 employees. Oshkosh was selected as the top company in this annual state-wide competition among Wisconsin-based manufacturers.

Oshkosh Defense was recognized for its operations and business excellence during the past year, and was judged on criteria, including financial growth, environmental solutions, technological advancement, operational excellence, commitment to employees and community support.

“The award acknowledges the progress and growth at Oshkosh Defense, as well the hard work and experience of our employees,” said Andy Hove, Oshkosh Corporation executive vice president and president, Defense. “This award is a tribute to the dedication of our workforce in building the finest military tactical wheeled vehicles to help supply our Armed Forces and help protect the lives of someone’s son, daughter, mother or father.”

For Oshkosh Defense, 2009 was a remarkable year. The Defense division won two major contracts and hired hundreds of new employees. The division first received an award on June 30, 2009 for the MRAP All-Terrain Vehicle (M-ATV) program, resulting in a $4.74 billion contract for 8.079 vehicles to be used in Afghanistan’s harsh rugged terrain. The contract award brought an immediate ramp up in production for this brand-new vehicle. This was an “urgent” needs project for the U.S. Army, and Oshkosh and its employees were able to design, test, build and begin delivering these life-saving vehicles to Afghanistan in less than a year -- a truly remarkable accomplishment.

“Our success is the direct result of attention to detail from our management, the skill and determination of our employees and a companywide commitment to continuous improvement. Each day we come to work with a purpose and leave with a great sense of pride,” said Hove.

Nominees for the Wisconsin MOTY awards must have major manufacturing operations in the state. Winning companies are also recognized for having made Wisconsin a better place to live and work through their operations and business excellence.

MOTY winners were announced at an awards program on Thursday, Feb. 25 at The Pfister Hotel in Milwaukee. The MOTY Awards Program is co-sponsored by Michael Best and Friedrich LLP, Baker Tilly Virchow Krause LLP, and Wisconsin Manufacturers & Commerce.

Oshkosh Defense, a division of Oshkosh Corporation, is an industry-leading global designer and manufacturer of tactical military trucks and armored wheeled vehicles, delivering a full product line of conventional and hybrid vehicles, advanced armor options, proprietary suspensions and vehicles with payloads that can exceed 70 tons. Oshkosh Defense provides a global service and supply network including full life-cycle support and remanufacturing, and its vehicles are recognized the world over for superior performance, reliability and protection. For more information, visit www.oshkoshdefense.com

Oshkosh Corporation is a leading designer, manufacturer and marketer of a broad range of specialty access equipment, commercial, fire & emergency and military vehicles and vehicle bodies. Oshkosh Corp. manufactures, distributes and services products under the brands of Oshkosh®, JLG®, Pierce®, McNeilus®, Medtec®, Jerr-Dan®, Oshkosh Specialty Vehicles, Frontline™, SMIT™, CON-E-CO®, London® and IMT®. Oshkosh products are valued worldwide in businesses where high quality, superior performance, rugged reliability and long-term value are paramount. For more information, log on to http://www.oshkoshcorporation.com/®, ™ All brand names referred to in this news release are trademarks of Oshkosh Corporation or its subsidiary companies.

This press release contains statements that the Company believes to be “forward-looking statements” within the meaning of the Private Securities Litigation Reform Act of 1995. All statements other than statements of historical fact, including, without limitation, statements regarding the Company’s future financial position, business strategy, targets, projected sales, costs, earnings, capital expenditures, debt levels and cash flows, and plans and objectives of management for future operations, are forward-looking statements. When used in this press release, words such as “may,” “will,” “expect,” “intend,” “estimate,” “anticipate,” “believe,” “should,” “project” or “plan” or the negative thereof or variations thereon or similar terminology are generally intended to identify forward-looking statements. These forward-looking statements are not guarantees of future performance and are subject to risks, uncertainties, assumptions and other factors, some of which are beyond the Company’s control, which could cause actual results to differ materially from those expressed or implied by such forward-looking statements. These factors include risks related to sustaining the required rate of production for the M-ATV contract and the amount, if any, of additional orders for M-ATVs that the Company may receive; the cyclical nature of the Company’s access equipment, commercial and fire & emergency markets, especially during a global recession and tight credit markets; the duration of the global recession, which could lead to additional impairment charges related to many of the Company’s intangible assets; the expected level and timing of U.S. Department of Defense procurement of products and services and funding thereof, risks related to reductions in government expenditures, the potential for the government to competitively bid the Company’s Army and Marine contracts and the uncertainty of government contracts generally; the consequences of financial leverage associated with the JLG acquisition, which could limit the Company’s ability to pursue various opportunities; risks related to the collectability of receivables during a recession, particularly for those businesses with exposure to construction markets; risks related to production delays as a result of the economy’s impact on the Company’s suppliers; the potential for commodity costs to rise sharply, including in a future economic recovery; risks associated with international operations and sales, including foreign currency fluctuations; and the potential for increased costs relating to compliance with changes in laws and regulations. Additional information concerning these and other factors is contained in the Company’s filings with the Securities and Exchange Commission. All forward-looking statements speak only as of the date of this press release. The Company assumes no obligation, and disclaims any obligation, to update information contained in this press release. Investors should be aware that the Company may not update such information until the Company’s next quarterly earnings conference call, if at all.