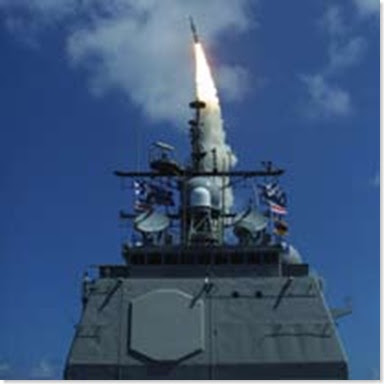 "This is the first Aegis BMD flight test conducted with two versions of the U.S. Navy Aegis BMD baselines and a Japanese destroyer," said Orlando Carvalho, vice president and general manager of Lockheed Martin's Surface-Sea Based Missile Defense line of business. "These events demonstrate the Aegis development success of build a little, test a little, learn a lot as well as the flexibility of the systems to evolve and keep pace with the threat to control the battlespace."

The Missile Defense Agency and the U.S. Navy are jointly developing Aegis BMD as part of the United States' Ballistic Missile Defense System (BMDS). The Navy's independent operational test agent has assessed the Aegis BMD and SM-3 Block IA system to be operationally effective and operationally suitable. Currently, a total of 22 Aegis BMD-equipped warships -- 19 in the U.S. Navy and three in the Japanese Maritime Self-Defense Force -- have the certified capability to engage ballistic missiles and perform long-range surveillance and tracking missions. Two additional U.S. East Coast-based Aegis-equipped ships are being modified to perform ballistic missile defense in the next six months.

The Aegis Weapon System is the world's premier naval defense system and the sea-based element of the U.S. Ballistic Missile Defense System. Its precision SPY-1 radar and integrated command and control system seamlessly guides the interceptor and uplinks target track information to the missile for terminal homing. Its ability to detect, track and engage targets ranging from sea-skimming cruise missiles to ballistic missiles in space is proven and unmatched. The Aegis BMD Weapon System also integrates with the BMDS, receiving track data from and providing track information to other BMDS elements.

The 92 Aegis-equipped ships currently in service around the globe have more than 950 years of at-sea operational experience and have launched more than 3,500 missiles in tests and real-world operations. In addition to the U.S. and Japan, Aegis is the maritime weapon system of choice for Australia, Norway, South Korea and Spain.

Headquartered in Bethesda, MD, Lockheed Martin is a global security company that employs about 140,000 people worldwide and is principally engaged in the research, design, development, manufacture, integration and sustainment of advanced technology systems, products and services. The corporation reported 2008 sales of $42.7 billion.