Defense News: SpaceX Announces Launch Date For The World's Most Powerful Rocket
**Falcon Heavy will lift more than twice as much as any other launch vehicle
**Source: SPACEX

“Falcon Heavy will carry more payload to orbit or escape velocity than any vehicle in history, apart from the Saturn V moon rocket, which was decommissioned after the Apollo program. This opens a new world of capability for both government and commercial space missions,” Musk told a press conference at the National Press Club in Washington, DC.

“Falcon Heavy will arrive at our Vandenberg, California, launch complex by the end of next year, with liftoff to follow soon thereafter. First launch from our Cape Canaveral launch complex is planned for late 2013 or 2014.”

Musk added that with the ability to carry satellites or interplanetary spacecraft weighing over 53 metric tons or 117,000 pounds to orbit, Falcon Heavy will have more than twice the performance of the Delta IV Heavy, the next most powerful vehicle, which is operated by United Launch Alliance, a Boeing-Lockheed Martin joint venture.

53 metric tons is more than the maximum take-off weight of a fully-loaded Boeing 737-200 with 136 passengers. In other words, Falcon Heavy can deliver the equivalent of an entire commercial airplane full of passengers, crew, luggage and fuel all the way to orbit.

Falcon Heavy’s first stage will be made up of three nine-engine cores, which are used as the first stage of the SpaceX Falcon 9 launch vehicle. It will be powered by SpaceX’s upgraded Merlin engines currently being tested at the SpaceX rocket development facility in McGregor, Texas. Falcon Heavy will generate 3.8 million pounds of thrust at liftoff. This is the equivalent to the thrust of fifteen Boeing 747s taking off at the same time.

Above all, Falcon Heavy has been designed for extreme reliability. Unique safety features of the Falcon 9 are preserved, such as the ability to complete its mission even if multiple engines fail. Like a commercial airliner, each engine is surrounded by a protective shell that contains a worst case situation like fire or a chamber rupture, preventing it from affecting other engines or the vehicle itself.

Anticipating potential astronaut transport needs, Falcon Heavy is also designed to meet NASA human rating standards, unlike other satellite launch vehicles. For example, this means designing to higher structural safety margins of 40% above flight loads, rather than the 25% level of other rockets, and triple redundant avionics.

Falcon Heavy will be the first rocket in history to do propellant cross-feed from the side boosters to the center core, thus leaving the center core with most of its propellant after the side boosters separate. The net effect is that Falcon Heavy achieves performance comparable to a three stage rocket, even though only the upper stage is airlit, further improving both payload performance and reliability. Crossfeed is not required for missions below 100,000 lbs, and can be turned off if desired.

Despite being designed to higher structural margins than other rockets, the side booster stages will have a mass ratio (full of propellant vs empty) above 30, better than any vehicle of any kind in history.

Falcon Heavy, with more than twice the payload, but less than one third the cost of a Delta IV Heavy, will provide much needed relief to government and commercial budgets. In fact, Falcon Heavy at approximately $1,000 per pound to orbit, sets a new world record in affordable spaceflight.

This year, even as the Department of Defense budget was cut, the EELV launch program, which includes the Delta IV, still saw a thirty percent increase.

The 2012 budget for four Air Force launches is $1.74B, which is an average of $435M per launch. Falcon 9 is offered on the commercial market for $50-60M and Falcon Heavy is offered for $80-$125M. Unlike our competitors, this price includes all non-recurring development costs and on-orbit delivery of an agreed upon mission. For government missions, NASA has added mission assurance and additional services to the Falcon 9 for less than $20M.

Please note that Falcon Heavy should not be confused with the super heavy lift rocket program being debated by the U.S. Congress. That vehicle is authorized to carry between 70-130 metric tons to orbit. SpaceX agrees with the need to develop a vehicle of that class as the best way to conduct a large number of human missions to Mars. 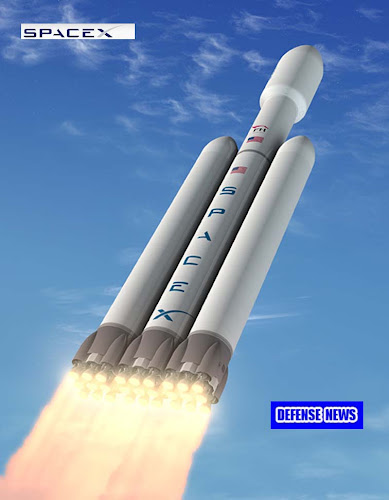 The Falcon Heavy Rocket will be the most capable rocket in the world. Credit: SpaceX

SpaceX develops, manufactures and launches family of launch vehicles and spacecraft that are increasing the reliability and performance of space transportation, while ultimately reducing costs by a factor of ten. With the Falcon rockets, SpaceX has a diverse manifest of launches to deliver commercial and government satellites to orbit. After the Space Shuttle retires, the Falcon 9 and SpaceX’s Dragon spacecraft will start carrying cargo, including live plants and animals, to and from the International Space Station for NASA. Falcon 9 and Dragon were developed to one day carry astronauts.

Founded in 2002 by Elon Musk, SpaceX is a private company owned by management and employees, with minority investments from Founders Fund, Draper Fisher Jurvetson, and Valor Equity Partners. The company has over 1,250 employees in California, Texas and Florida. For more information, and to watch the video of the Falcon 9 and Dragon launches, visit the SpaceX website at SpaceX.com.